1970: Did first Indian tour with his Western disciples: 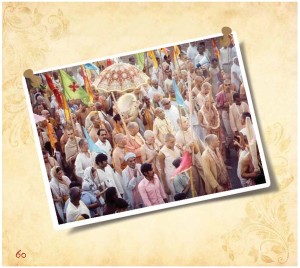 This tour across India gave his Western disciples a fuller experience of the bhakti culture that was still widespread in India; and it showed Indians how Westerners had so diligently embraced the very culture that they themselves were neglecting or rejecting. His tour created a spiritual sensation with Indians astonished to see young Westerners adopting traditional Indian practices and principles: Young Western women wearing sarees; and young Western men with shaven heads wearing dhoti-kurtas. His tour won the hearts of thousands of Indians who went on to become ardent supporters and members of ISKCON.