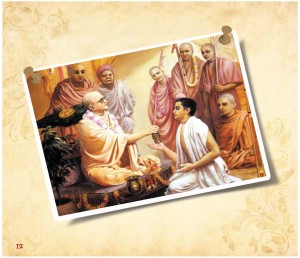 The memories of the life-transforming first encounter with his master would gestate within Abhay for a decade before they manifested in his becoming a formally initiated disciple. While he was being initiated, his master showed him special favor, appreciating his spiritual acumen as evidenced in his eagerness to hear and learn. While granting Abhay a spiritual name, his master added Aravind – thus Abhay became Abhay Charanaarvind, signifying that the fearlessness (abhay) the human heart longs for is found in the lotus (aravind) feet (charan) of the Supreme, who is the source of the ultimate security.