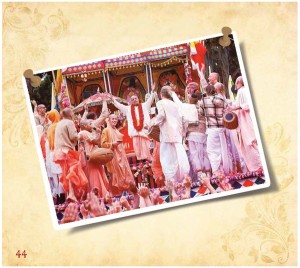 The Swami constantly meditated on how to make the sweetness of bhakti more accessible to his Western audience. Once, when he saw a flatbed truck going along the road, he got the divine inspiration to utilize it as a vehicle for replicating the Ratha-Yatra festival. One of his disciples had coincidentally found in a nearby antique shop small images of Jagannatha, Baldeva and Subhadra. Seeing the coincidence as a divine arrangement, the Swami asked a disciple who had some experience in sculpting to fashion larger replicas of those images. And thus manifested the first Ratha-Yatra festival outside the Indian subcontinent. Jagannath rode atop his improvised chariot through the streets of San Francisco with people who had never before heard of him beholding, cheering, clapping, singing, dancing, receiving prasad and being blessed.

The Ratha-Yatra, or the Chariot Festival as it came to be known, became immensely popular. The hippies loved the public dancing and singing – while earlier they would have been arrested for dancing on the streets, now they were being escorted by the police.

Since that beginning in San Francisco, Ratha-Yatra has gone on to become a global cultural phenomenon. It is celebrated in scores of countries and hundreds of cities, from Boston to Belfast to Brisbane; and from Dublin to Dubai to Dnepropetrovsk.