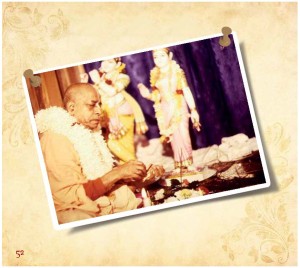 As his followers became increasingly devoted to Krishna, Srila Prabhupada decided that the time was right to unveil the next phase in his spiritual transplantation of the bhakti culture: introducing Deity Worship. In Los Angeles, where he had attracted a substantial following and which had thus become the de facto Western headquarters of his movement, he installed ISKCON’s first Radha-Krishna Deities. For worshiping those Deities, he trained and initiated some of his dedicated disciples, making them ordained priests. That temple was to become the first among hundreds all over the world – temples that offer spiritual retreat and rejuvenation to millions.