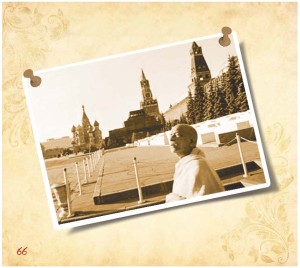 Having shared spirituality successfully in the Western super-power America, Srila Prabhupada had set his sights on the other superpower: Soviet Russia. But that country’s communist government and underlying atheistic ideology made its Iron Curtain much more difficult to penetrate. But Srila Prabhupada was tenacious. Finally through his correspondence with a respected Russian professor of religion, he was able to visit USSR for five days. But he wasn’t allowed to do any public programs, and he had to spend most of those days in a small hotel room. Yet his spiritual potency couldn’t be suppressed by anything material. Through a series of transcendental coincidences, one sincere Russian seeker, Anatoly Pinyayev, came to meet him in his hotel room. Anatoly heard from him like a starving man offered a feast. Srila Prabhupada blessed and empowered him, granting him the initiated name Ananta Shanti das.

Through this first Russian Krishna devotee, the message of spiritual love spread gradually but unstoppably to thousands. Unfortunately, the devotees faced severe persecution from the KGB. The devotees were nonviolent and tolerant – and wanted to do nothing more than simply follow their heart’s calling to love Krishna, and share that love with others.  Yet the KGB declared that the three main threats to the Soviet Union were “pop music, Western culture, and Hare Krishna.” Decades of persecution ensued till the fall of communism. Thereafter, devotees were able to follow their heart’s calling much more freely and with amazing results – the Newsweek magazine (1994) noted that the Hare Krishna movement was the fastest growing religion in Russia.